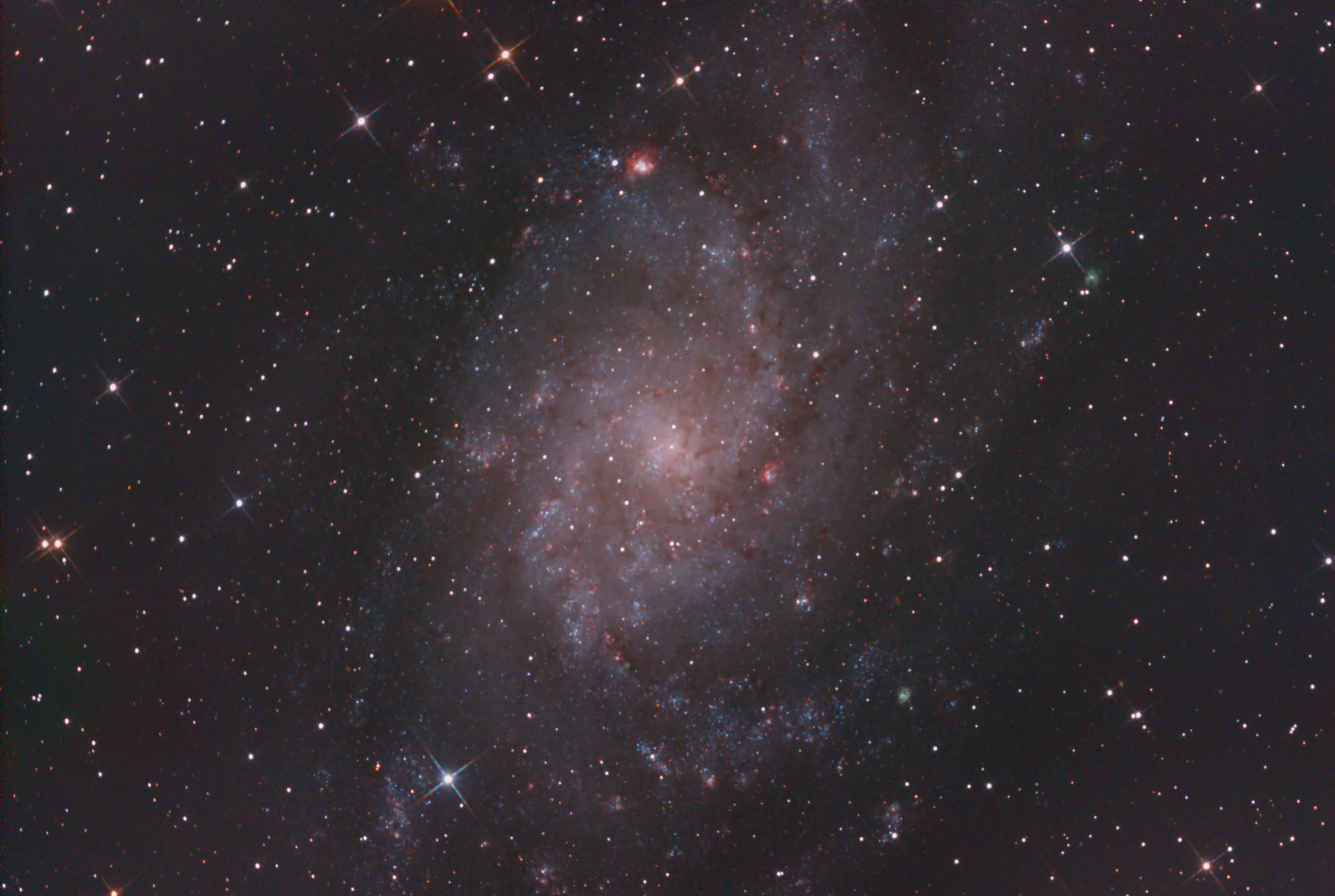 In this tour we cover a small area in the constellation Triangulum, which is located between Andromeda and Aries. The name and the size suggest a modern constellation, but it belongs to the classical 48 constellations and is known since ancient times. The brightest star, Beta Trianguli, has a magnitude of 3m.0. Alpha Trianguli is the second brightest star with 3m.4 and is also called Mothallah or Elmuthalleth (Arabic origin, “tip of the triangle”) or Caput Trianguli (lat. “head of the triangle”). All other stars are fainter than 4m.0.

Besides worthwhile galaxies (e.g. NGC 925, NGC 750/1 = Arp 166) and double stars (e.g. Iota Trianguli) the constellation is best known for Messier 33 (Triangulum Nebula). After the two Magellanic Clouds in the southern sky and the Andromeda Galaxy Messier 33 is with 5m.7 one of the apparently brightest galaxies in the sky and part of the Local Group. The spiral structure was first described by the Irish astronomer Lord Rosse (William Parsons) in 1845. He observed with a 72-inch reflecting telescope, commissioned in the same year and unofficially named Leviathan. A few weeks earlier he also observed spiral arms in Messier 51. However, these observations were doubted by astronomers for a long time. 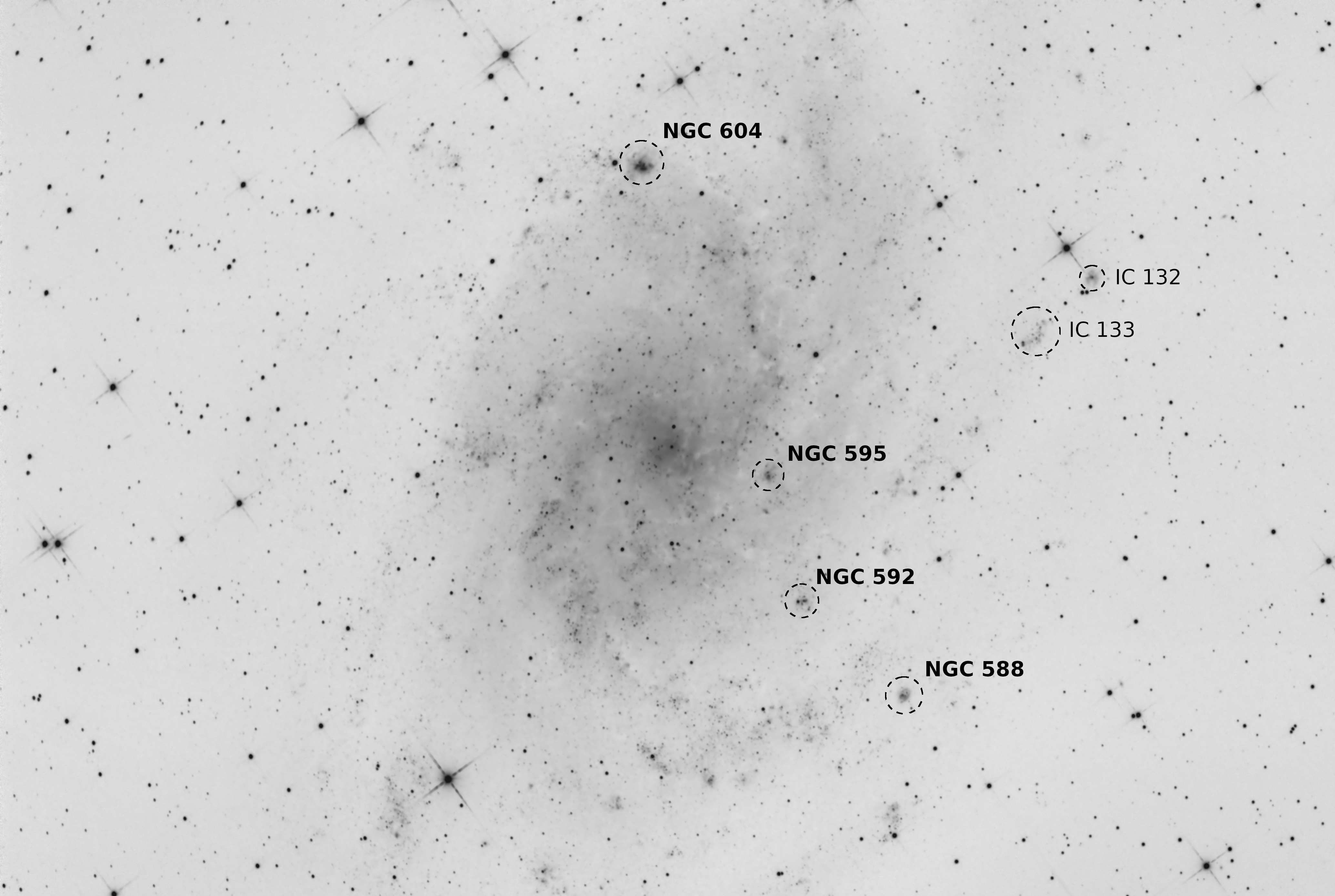 Messier 33 – Data as image above, inverted and labeled by Robert Zebahl

Due to its brightness Messier 33 can be observed quite well with the naked eye under dark skies and appears as a faint nebula. With some experience, the oval shape can also be seen. The galaxy is impressive in any instrument including binoculars and also reveals the spiral structure when observed carefully in a medium sized telescope. However, individual objects can also be observed in Messier 33. Most of them are HII regions or star associations. Most objects are included in the New General Catalogue (NGC) or Index Catalogue (IC). UHC filters can be helpful in observing the HII regions. The brightest HII region is NGC 604 (12m.0) on the northeast edge of Messier 33 and is well visible with an aperture of about 4 inches as a round, compact nebula. As aperture and magnification increase, details can also be observed. NGC 604 was already discovered by William Herschel in 1784.

For the next three objects from the NGC an aperture of about 8 inches and high magnification is recommended. Furthermore, a detailed finding chart is required. By the way, the German-Danish astronomer Heinrich Louis d'Arrest is named as the discoverer of these three objects, who observed them for the first time in 1861 (NGC 588 & NGC 592) and 1864 (NGC 595). The HII region NGC 595 (13m.1) lies northwest of the center in the middle of the halo. It appears in an 8-inch Dobsonian at least as an oval, small brightening. Moving further west of the center of Messier 33, we come to NGC 592 (13m.0). It is a HII region and large star association. Conspicuous are two bright knots with a distance of nearly 25". Under which conditions are these knots visually visible? Even further west outside the halo we find NGC 588 (13m.5). Again, only a compact, rather faint brightening will be visible in medium sized telescopes.

In addition, there are over a dozen other HII regions, most of which were discovered by the French astronomer Camille Guillaume Bigourdan in 1889. There is much to discover in Messier 33, so that one can fill whole evenings with it. If you are looking for something different and prefer to observe extra-galactic globular clusters, you can find these in Messier 31, the Andromeda galaxy. The best known globular cluster is Mayall 2 (G 1) well outside the halo of Messier 31 and can be seen already with 6 inch aperture as a very compact brightening. Much easier is the very large star association NGC 206, which stands out clearly on photographs.

As always we wish you a lot of joy and relaxation while observing.