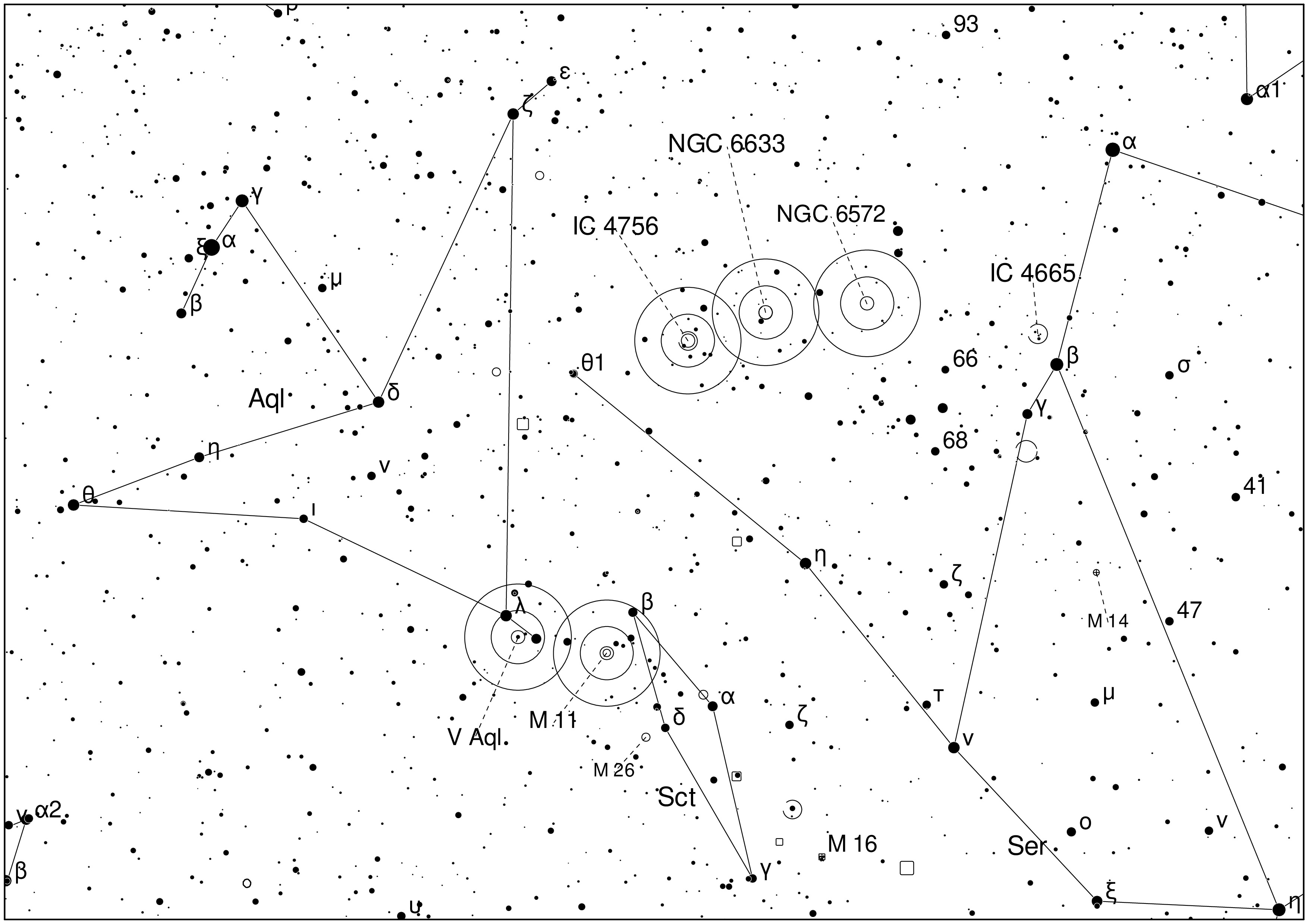 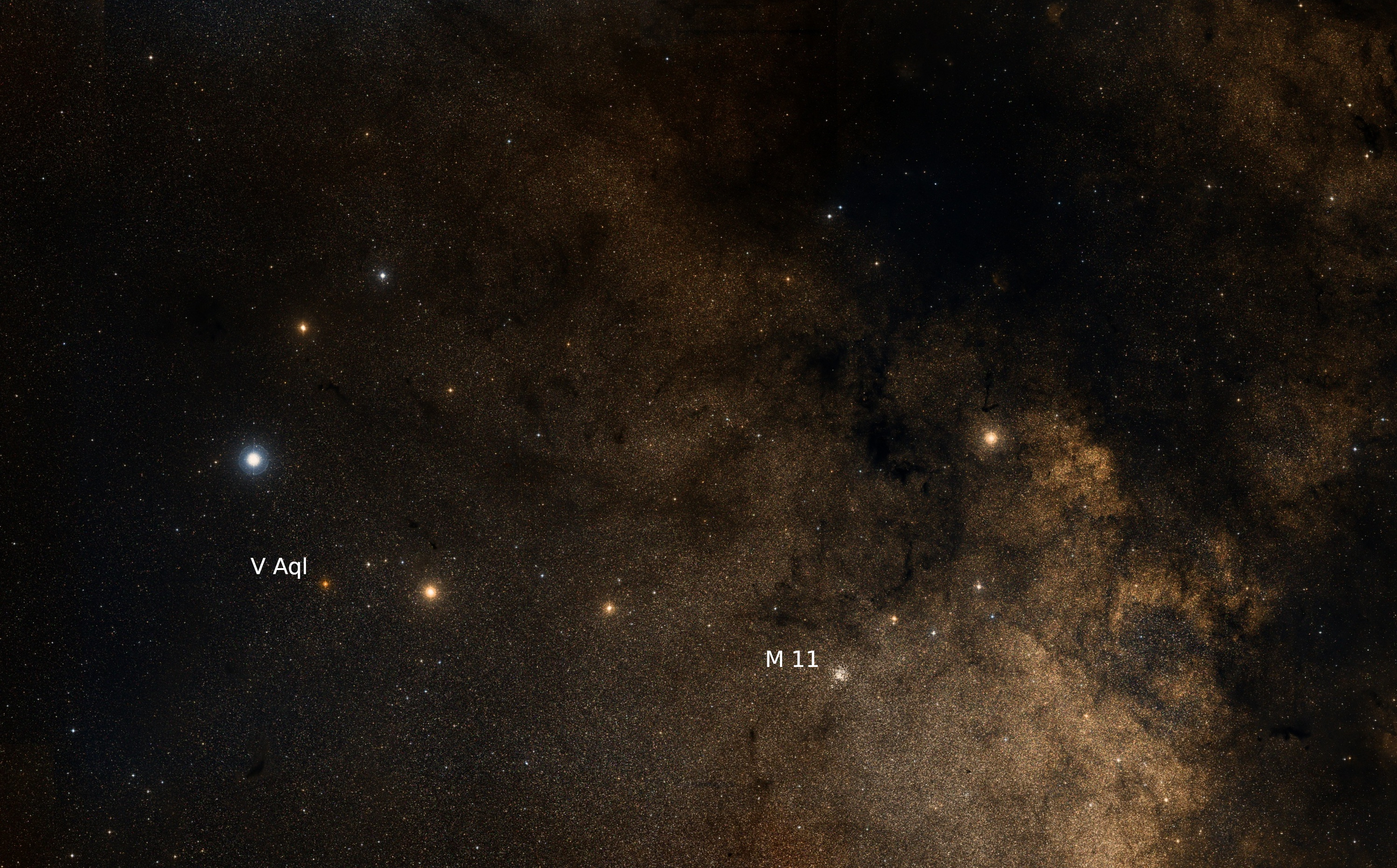 A small, inconspicuous constellation is the Shield (lat. Scutum), which adjoins the Eagle (lat. Aquila) to the southwest. Its brightest star, alpha Scuti, has an apparent magnitude of 3m.85. The constellation was introduced in 1690 by Johannes Hevelius in honor of the Polish king Jan III Sobieski, who liberated Vienna from the Turks. The shield has symbolic character. At that time the constellation was named Scutum Sobiescianum, but later it was changed to Scutum by John Flamsteed.

The objects presented here are all already visible with binoculars, often under urban conditions. Most conspicuous is the Shield Cloud or Scutum Cloud as a particularly bright part of the Milky Way with a diameter of about 5°. Even under brightened skies, when the Milky Way appears dim at the zenith, the Shield Cloud is easily visible to the naked eye. North of the shield cloud there are some dark nebulae, which require a dark sky. In the northern part of the Shield Cloud lies the very compact and rich open cluster Messier 11, which is also called Wild Duck Cluster. Even with small binoculars under suburban conditions the cluster is very eye-catching, but not resolvable. At its southeastern edge there is a prominent star. Often the shape of the cluster is described as comet-shaped. In the telescope it is resolvable and with increasing aperture more and more individual stars appear - a worthwhile object for any instrument. Slightly east of Messier 11 in the constellation Aquila we find the carbon star V Aquilae, whose brightness varies only slightly around 7m.0. The most beautiful view should be offered by binoculars, which present the orange star beautifully embedded in its surroundings. Due to its proximity to lambda Aquilae it is very easy to find. 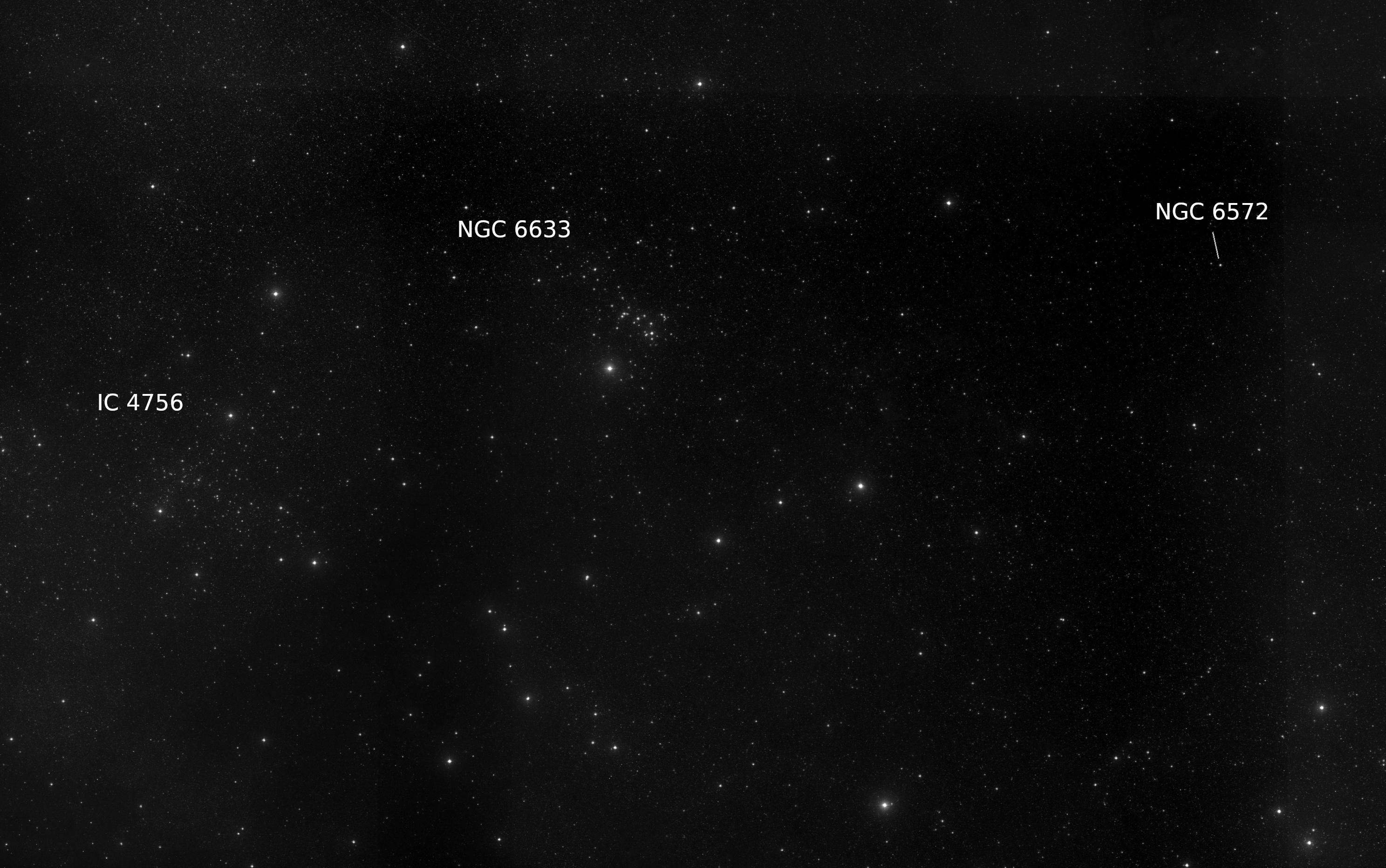 Further northwest at the border between the Serpent Bearer (Ophiuchus) and the Head of the Snake (Serpens Caput) two more open clusters can be found. IC 4756 is a rather fainter cluster with a comparatively large angular size of about 40'. Binoculars or a telescope with low magnification are sufficient. The distribution of stars is rather irregular, with quite a few star chains. At a distance of only 3° we come to NGC 6633, which has a similar character like IC 4756. But it looks rather elongated. Under dark skies more than a dozen stars are already visible with 10x50 binoculars. A binocular with low magnification should show both clusters together in one field of view.

If we move again nearly 4° to the west, we reach the planetary nebula NGC 6572. It is a very young and therefore compact nebula. While the central star is pretty faint with 13m.6, the nebula itself has an apparent brightness of 8m.1. The high surface brightness makes the nebula appear greenish in the telescope, which is why it is also called Emerald Nebula. In binoculars or at low magnification in the telescope, the nebula appears stellar. High magnifications are useful for seeing the shape or details. On detailed photographs the elongated shape is clearly visible. Steady air is more important than dark skies.