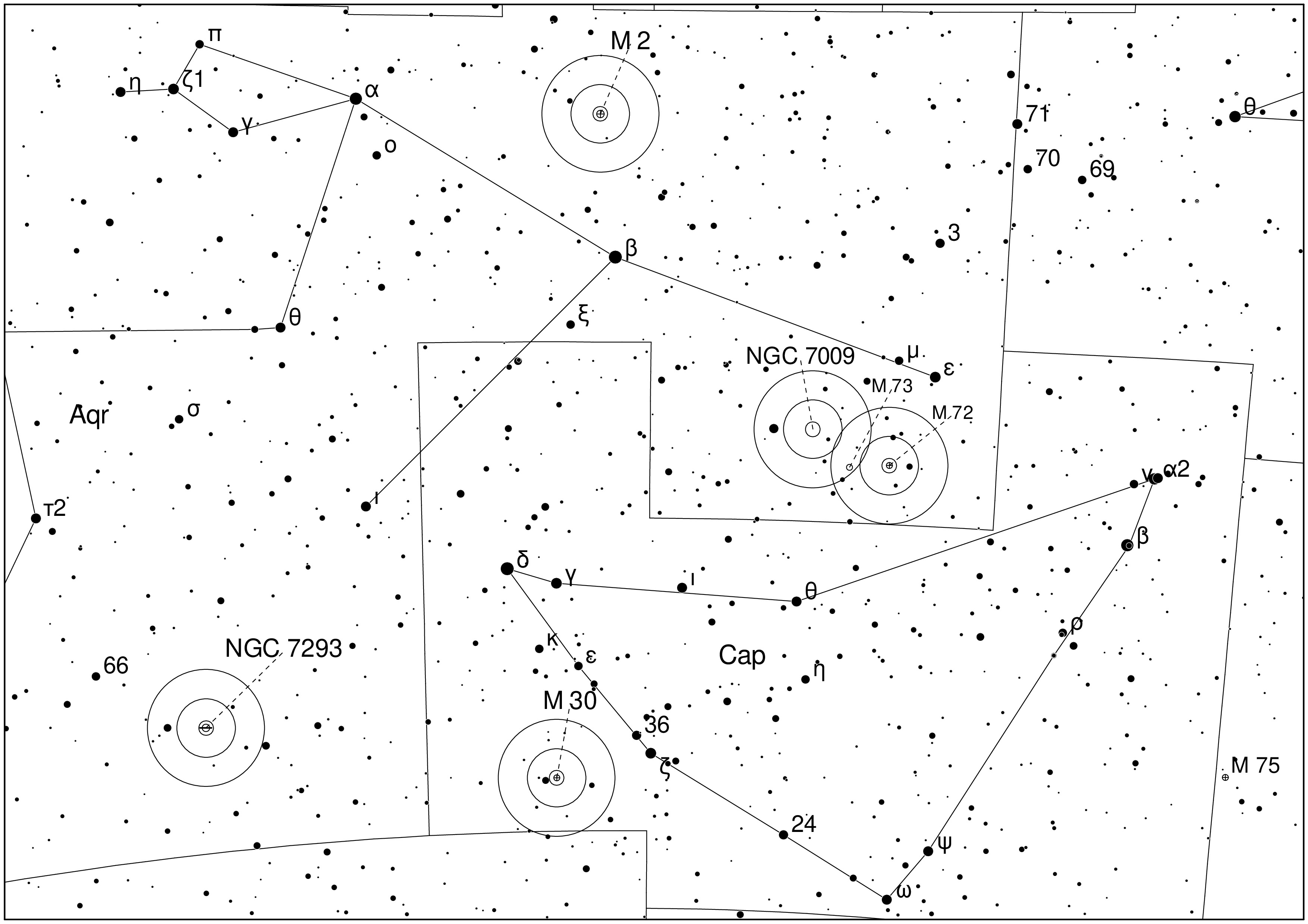 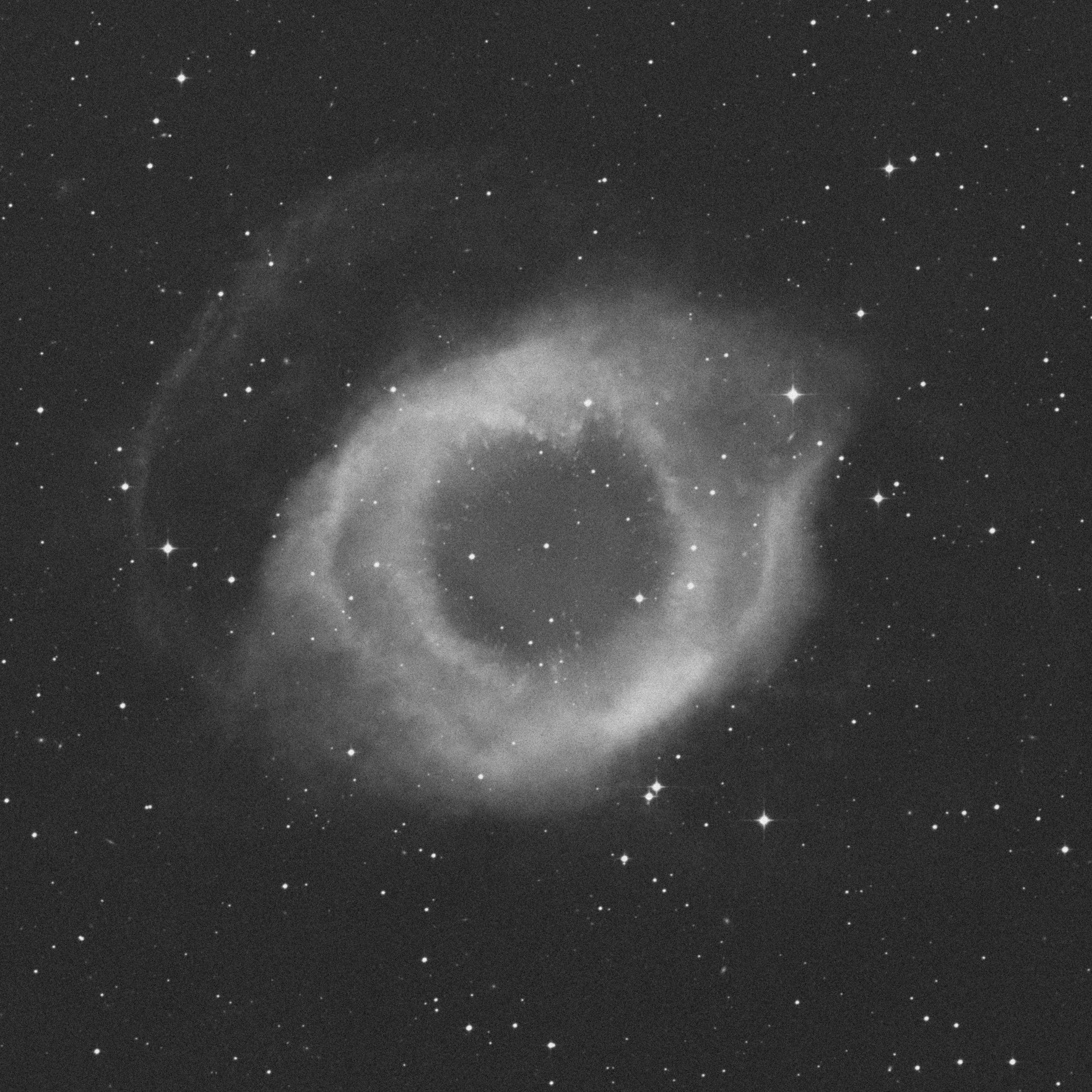 This tour is near the boundary between Aquarius and Capricornus quite far south. So observers in the northern latitudes have to be prepared for quite low object altitudes.

The most southern and probably most impressive object is the Helix Nebula (NGC 7293). Among planetary nebulae it has the largest apparent diameter. Images from various large telescopes show numerous details within the nebula. With an apparent total brightness of 6m.3 it is bright, but appears quite faint due to its size. Nebula filters (UHC & [OIII]) are of great help, whereas [OIII] filter works best. Under dark rural skies and good horizon conditions, medium sized binoculars are fine to use. In 16x70 binoculars with UHC and [OIII] filters behind the eyepieces, the Helix Nebula appears as a large, round, homogeneous brightening. In telescopes also with increasing aperture the ring structure becomes visible. A stunning object for almost any instrument, if conditions are good enough. 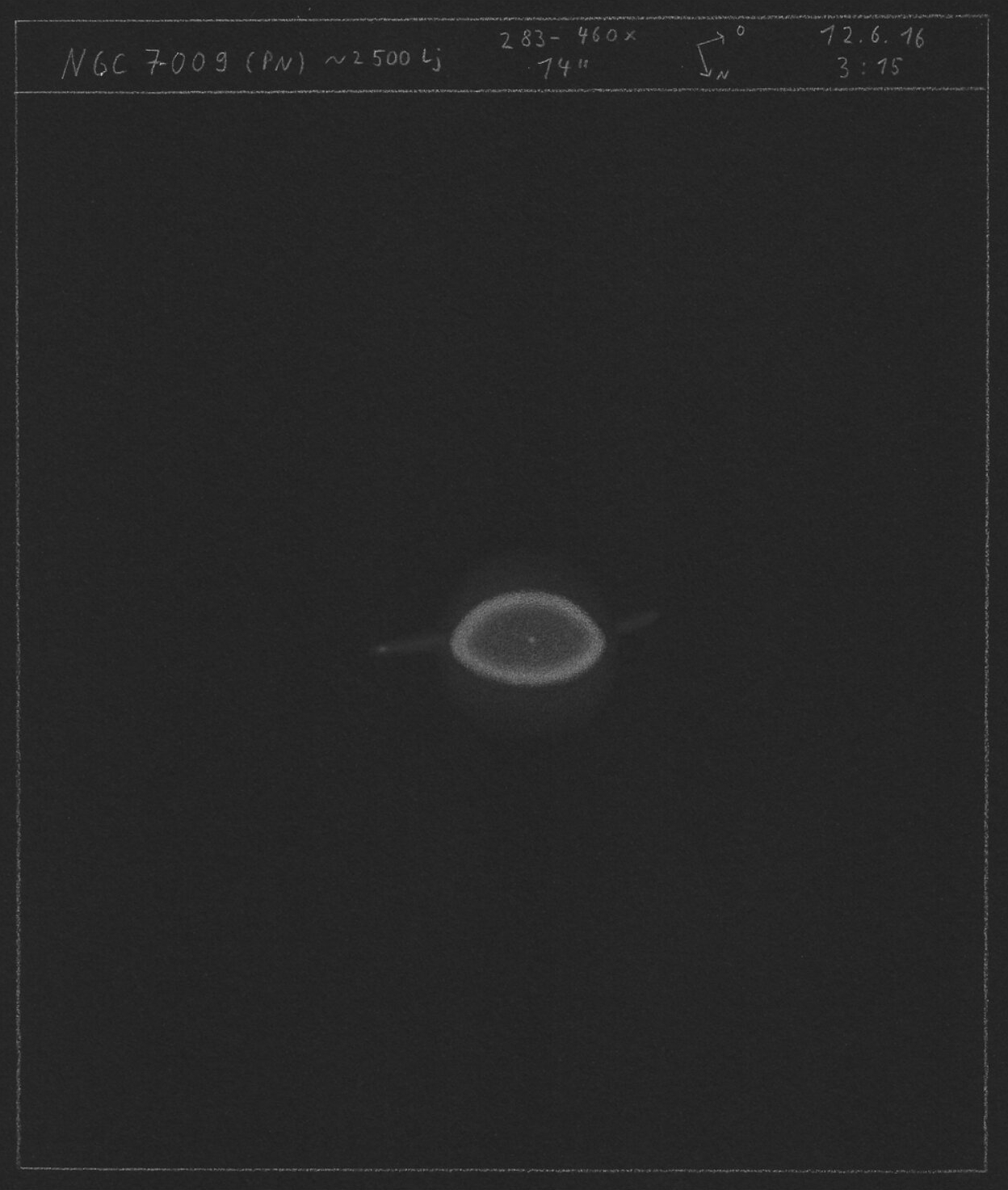 The globular cluster Messier 2 is the most northern of the objects presented here and with 6m.2 the easiest to observe. Binoculars are also fine here. In a telescope the cluster is very condensed and depending on the aperture of the telescope individual stars can be seen. With about 100,000 members Messier 2 belongs to the clusters with a higher number of members.

West halfway between Messier 2 and Messier 30 is Messier 72, a 9m.0 faint globular cluster. Successful observation with binoculars requires at least dark rural skies, but even then it remains a rather faint, small nebula. But even in the telescope it mostly stays a diffuse nebula and shows up at best grainy with 12 inch aperture. Towards the east you can see a rather unspectacular object from the Messier catalog: Messier 73. It is just a small group of stars between 10m.3 and 12m.3. Due to the small separation between them, the group appears slightly nebulous at low magnification. This might explain why this “object” was included by Charles Messier in his catalog.

Not far from Messier 73 we find NGC 7009, also known as Saturn Nebula. With a total brightness of 8m.0 and the small angular size, the Saturn Nebula is already reachable for binoculars and appears at best as a small, slightly fuzzy star. It allows high magnifications in a telescope and appears as an oval nebula. Due to the high surface brightness some color can be seen. The name of the nebula results from its appearance: the jets coming out on both sides shall remind of the rings of Saturn. At which aperture are the jets visible? Mathias Sawo shows with his sketch what is feasible under very good conditions and 14 inch aperture.

Those who prefer to observe Saturn can rejoice: In autumn 2021, the planets Jupiter and Saturn are each only about 10° apart from the Saturn Nebula. The separation to Saturn will be even smaller in autumn 2022.