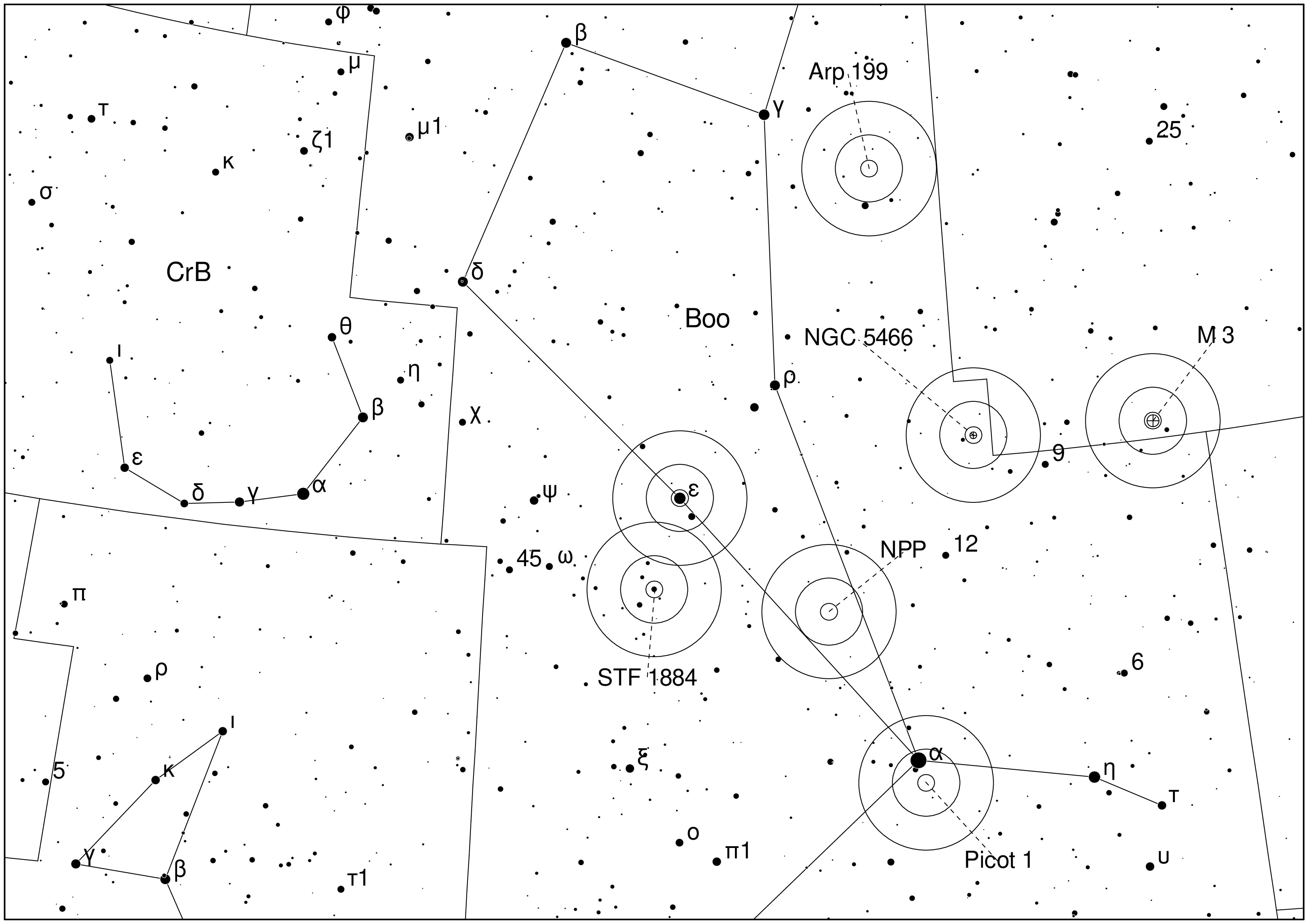 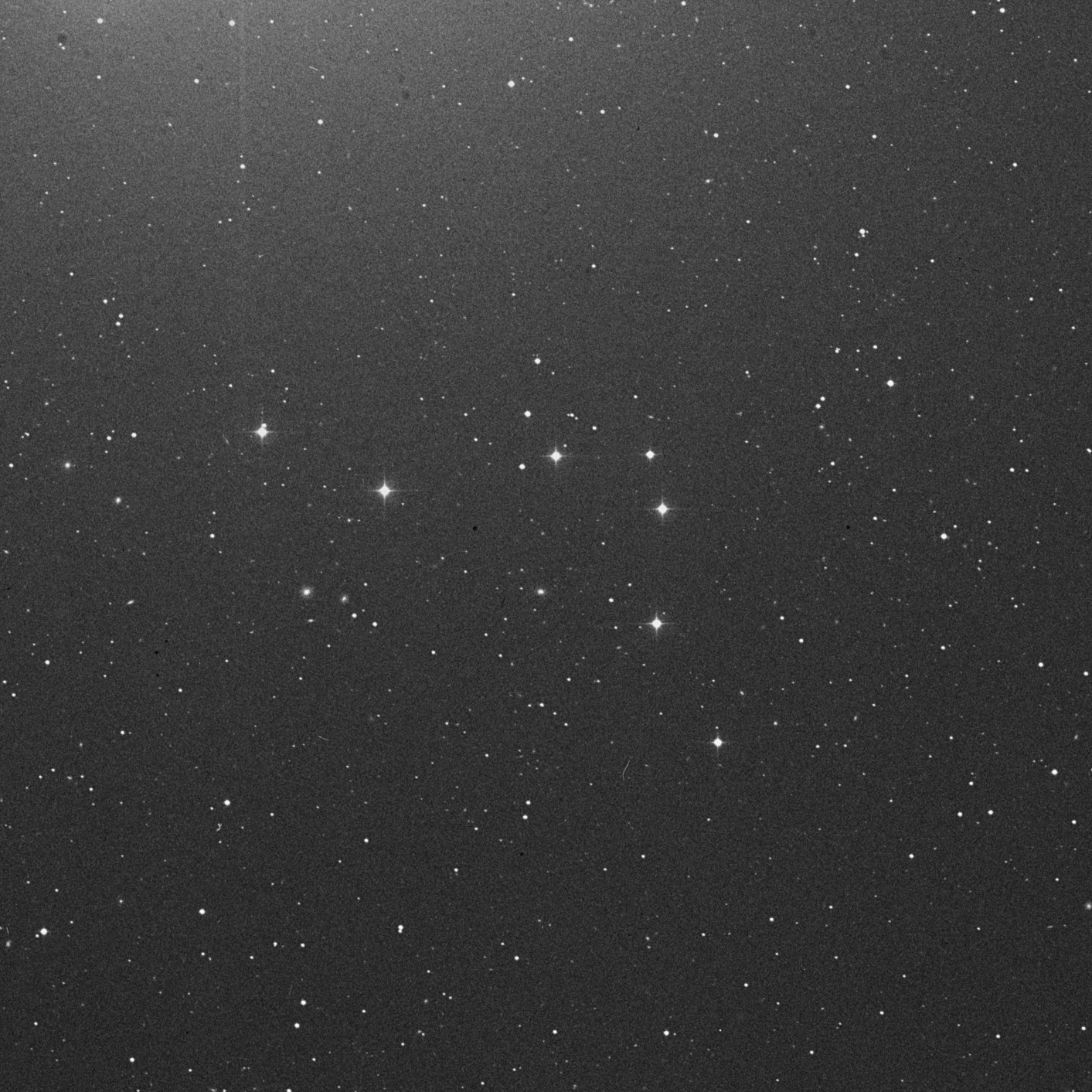 This time our sky tour will take place in the constellation of the Herdsman (lat. Bootes). The main star Arcturus is the third brightest star in the sky. Bootes belongs to the old constellations and is known since ancient times. There are several myths and stories, which will not be discussed here.

Since Bootes is far away from the band of the Milky Way, there are hardly any star clusters or nebulae to be found. But it holds quite a number of double stars, but also some beautiful galaxies. First we want to start close to Arcturus, where the star pattern Picot 1 is located. It consists of 7 stars with magnitudes between 9m.5 and 10m.6 and can be observed already under urban conditions with medium sized binoculars. Because of its shape it is also known as “Napoleon's Hat”, with the tip of the hat pointing to the northwest. But it does not necessarily have to be a hat. Description by Robert Zebahl with 16x70 binoculars under urban skies: “Pretty prominent star pattern, which indeed can be interpreted as a hat. The brim of the hat towards southwest appears shortened due to a fainter star. I tend to see a small mountain here. All in all a quite attractive star pattern.” René Merting describes Picot 1 in his 12.5-inch Dobsonian under dark rural skies as follows: “Here it is noticeable that not many more stars, than visible in small apertures, are added in the surrounding area, the pattern stands quite alone - the thought of a maggot crawling to the yellow-golden apple Arcturus appeals to me better than the hat.” Whether hat, mountain or maggot, the pleasure of observing was certain. 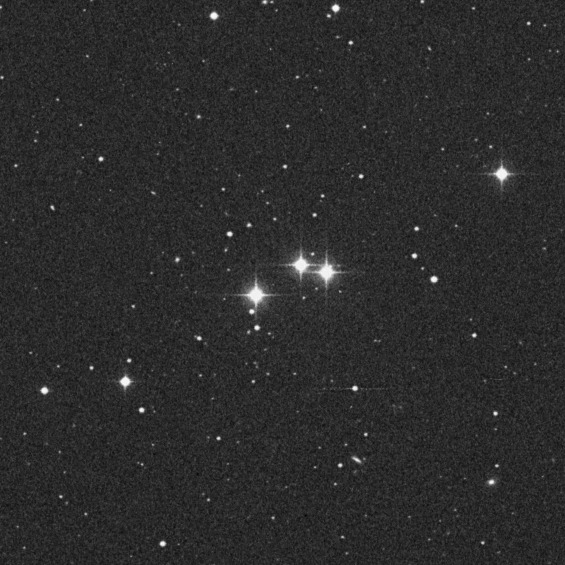 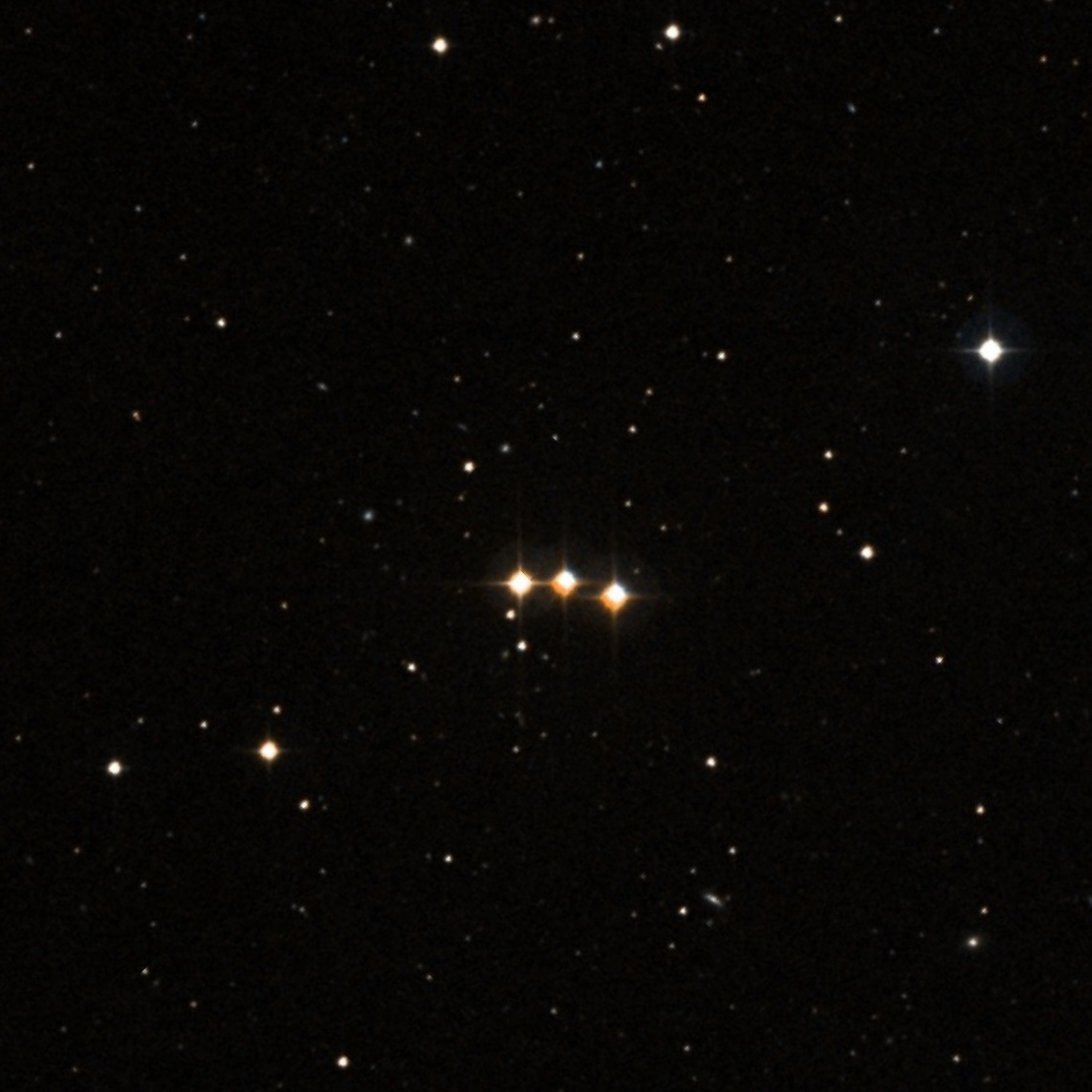 Further north we come to another very special star pattern. It is called “Normans Passing Pair” (NPP) and was first described in 2018 by the German amateur astronomer Norman Görlitz. At first glance, there are three medium bright stars, which are quite conspicuous because there are no brighter stars in the near surrounding. The peculiarity is that the two western stars form a physical pair of the multiple system BU 1442, which moves with quite high proper motion of about 1.37" per year towards southeast. The eastern one of the three stars is only a background star. The proper motion can be seen very well when comparing the two DSS images. The left DSS image (1) is an older image of the first DSS version.

Photographically and visually the proper motion can be recognized well also in the course of some years. For a first observation 16x70 binoculars are already sufficient. At a quick view the three stars appear more as an elongated nebula, but at a closer look they are clearly separated. For the detection of the proper motion of course a telescope is recommended. 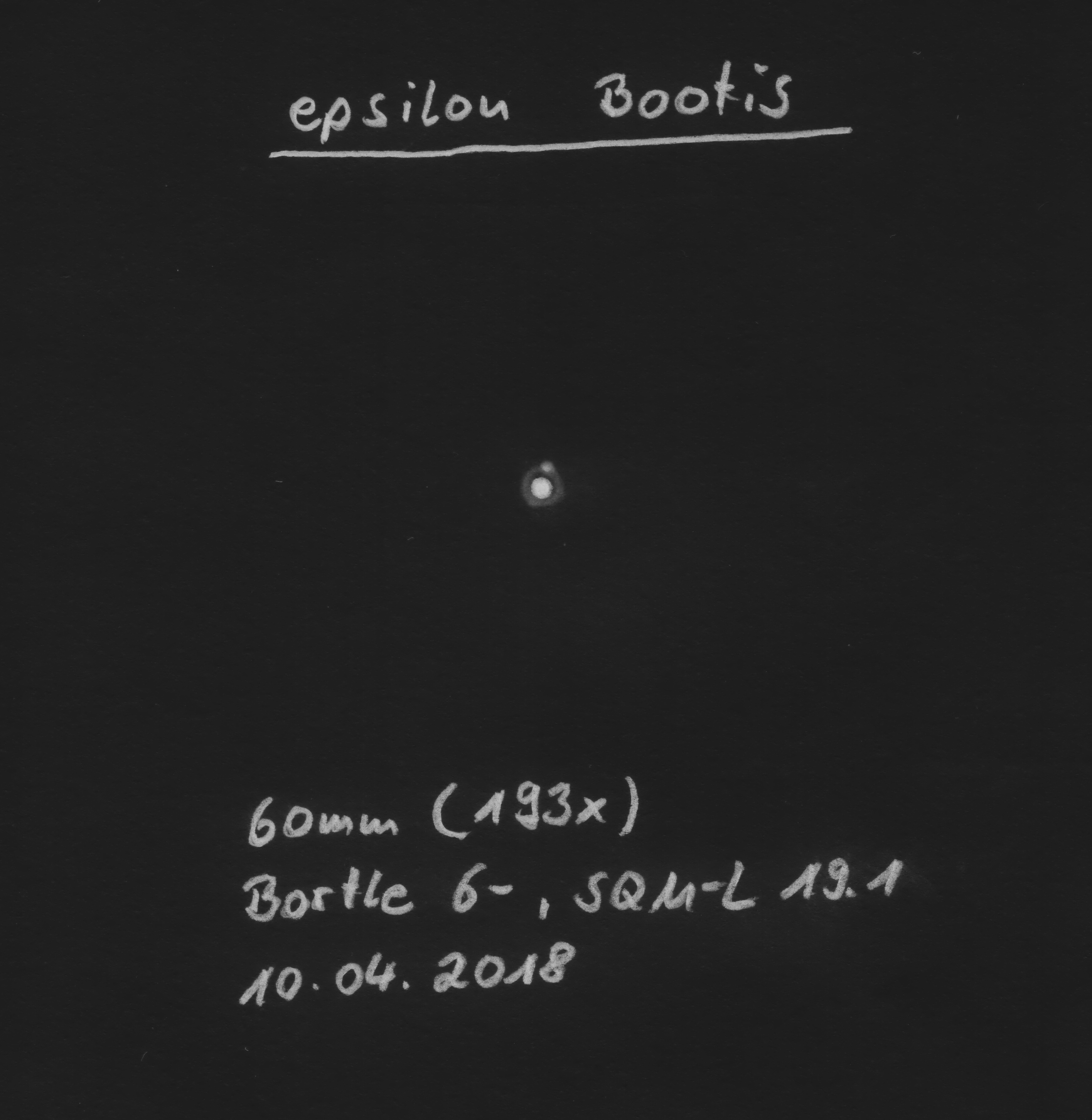 Next we visit two double stars and start with a classic: epsilon Bootis (Izar). With an angular separation of about 2.8" and a brightness difference of the components of a little more than two magnitudes it can be observed very well in almost any telescope. Due to the overall brightness it can be found quickly even under brightened skies. The primary component appears to observers yellowish to orange, the companion gray or blue. Especially with small telescopes very high magnifications are beneficial, because the fainter companion then already merges with the first diffraction ring of the primary component. This can be well seen in the sketch alongside.

South of epsilon Bootis the double star STF 1884 can be found. With 6m.6 and 7m.5 at an angular separation of 2.1" it should still be separable well in smaller telescopes from about 80mm aperture. In even smaller telescopes close observation is required, at about 100mm aperture it is easy to separate at a magnification of 160x. A double star worth to be observed, even if not very colorful. 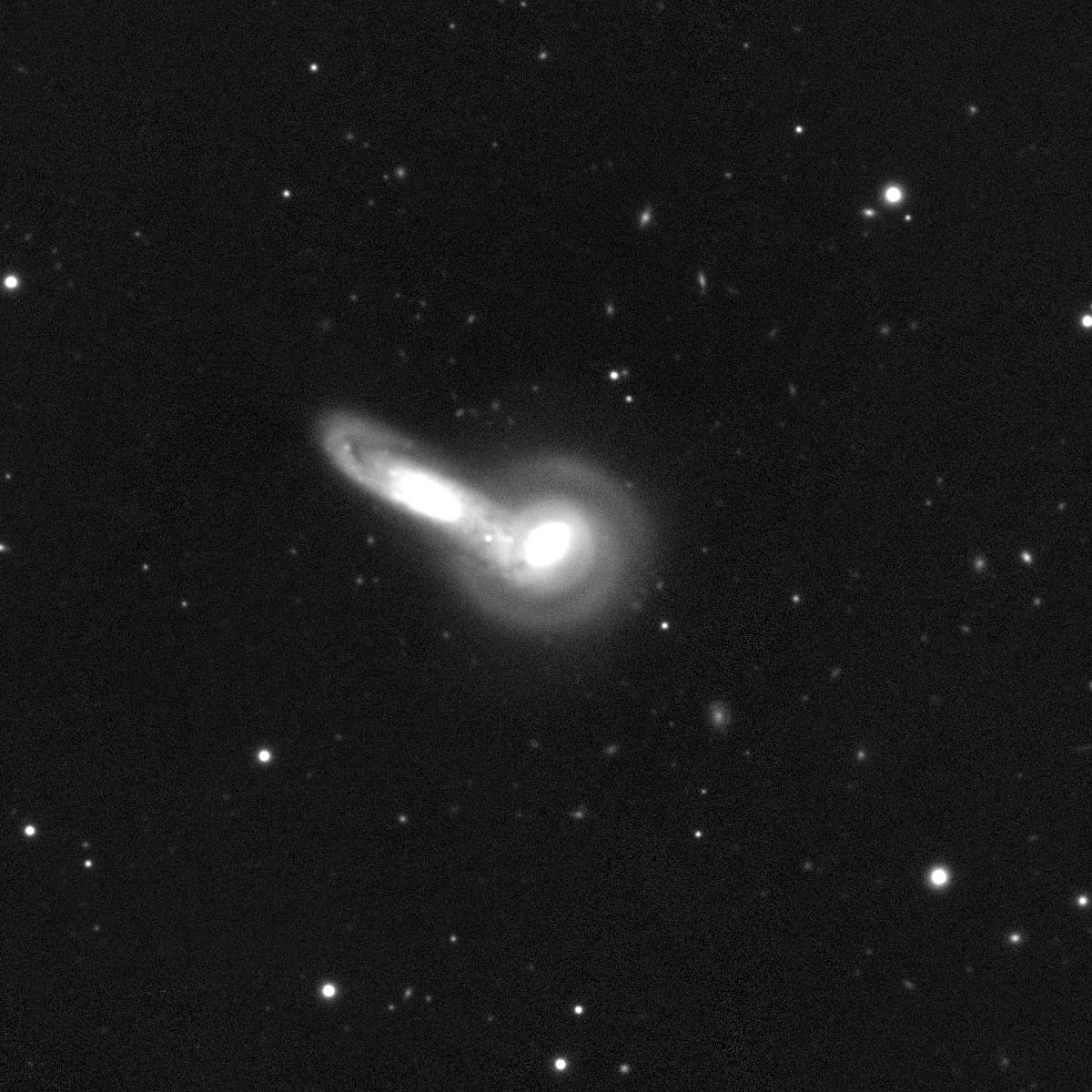 Our tour now comes to two globular clusters, which are very different in their appearance. Messier 3 (6m.4) appears very bright and very condensed, NGC 5466 (9m.1) on the other hand is much fainter without significant brightness increase towards the center. While Messier 3 is already easily visible as a compact nebula under brightened skies in small 8x40 binoculars, NGC 5466 needs quite dark rural skies, but is then also visible in medium sized binoculars due to its angular size of nearly 10'.

Last and most difficult object is the interacting pair of galaxies Arp 199, consisting of NGC 5544 and NGC 5545. The information about the overall brightness varies a lot depending on the source. The maximum apparent angular size of the galaxies is 1' or less, so rather high magnifications are required to separate the two galaxies from each other. With an aperture of 8 inches under dark rural skies (Bortle 4), the pair is by no means easy, but also not challenging for the experienced observer. The shape of the galaxies can be well seen at 150x, but the separation of the galaxies is quite difficult.

Finally, we wish you a lot of fun with the observation.